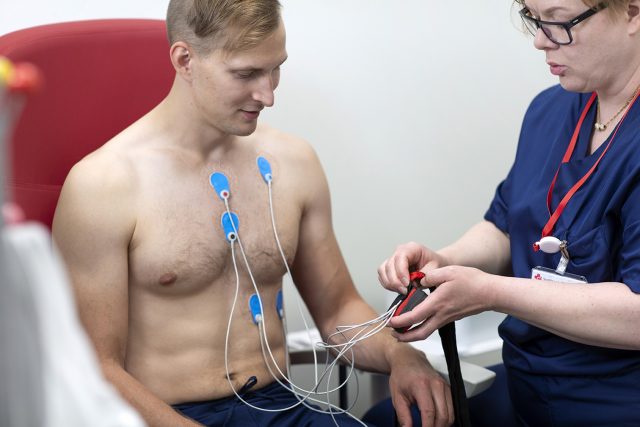 The bases for examining cardiac arrhythmia symptoms are the patient’s interview (anamnesis, performed by the doctor) and their status.

The patient’s ECG is recorded, blood tests are taken, and heart structure and function are evaluated by ultrasound examination. Further tests often include ECG long-term regression (Holter) and stress test. At times, cardiac imaging is required either by magnetic research (MRI) or by computer tomography (TT/CT). Invasive electrophysiology refers to the treatment of arrhythmias by catheterisation techniques (including atrial fibrillation).

In invasive treatments, we also use versatile speciality technologies, such as robot-assisted magnetic navigation, and Carto and Ensite modelling technology. We perform pacemaker, (IPG), arrhythmia (ICD) and cardiac resynchronisation therapy by CRT-P and CRT-D.

What does an electrophysiologic study investigate?

How are electrophysiological examination and catheter therapy performed?

In electrophysiological study and catheterisation, a long thin a catheter is inserted into an artery or vein in your groin, neck or arm and threaded through your blood vessels to your heart. Catheters are used to register the heart’s internal “electrocardiography”, which reveals the functioning of the heart’s electrical conduction pathways and the mechanisms of various arrhythmia disorders. Electrophysiological research usually does not involve significant pain. Diagnostic electrophysiological research often continues with the simultaneous catheter ablation treatment of the arrhythmia.

What happens during ablation treatment?

In ablation therapy, a small area of heart tissue that is causing rapid and irregular heartbeats is destroyed with the catheter. Pain relief is used when necessary. Electrophysiological examination and catheter ablation usually take 2-3 hours. In special cases, the procedure may take 4-6 hours. The risk of complications using this procedure is generally low, between 1%-5%. The procedure usually requires only one night in the hospital. Sometimes discharge may even take place on the day of operation. A 3-5-day sick leave is usually needed.

For many patients, catheterisation cures the problem, but continued arrhythmia medication is sometimes necessary. In addition to combining catheter and drug therapy, it may also be necessary to have pacemaker treatment. This is the case when symptoms of bradycardia are present or the heart’s pumping capacity is significantly reduced due to coronary heart disease or dysfunction.

What is studied by 24-hour ECG monitoring?

This monitoring is used to determine the origin, seriousness and significance of arrhythmia. Daily monitoring can be used to determine whether arrhythmia is atrial or ventricular. It also seeks to clarify the cause of syncope and to obtain information on myocardial oxygen deficiency. 24-hour ECG monitoring may also be helpful in cases of coronary artery disease, for instance when there are night-time symptoms with a suspicion of underlying coronary heart disease.

How is ECG monitoring carried out?

Daily registration is like ECG registration. Five or seven ECG electrodes are placed on the patient’s chest to monitor their heart rate for 24 hours or 48 hours. In the study, the patient reports arrhythmia and other cardiac symptoms in a diary, and afterwards the doctor compares the ECG and the symptoms described by the patient.

The patient is encouraged to live normal life during the study and to carry out activities that may trigger their arrhythmia. The heartbeats (approximately 100,000 in a 24-hour period) during the study are recorded in the device’s memory and deciphered for subsequent analysis.

For some people, arrhythmia occurs infrequently. In symptomatic recording, the patient is monitored for several weeks and the patient activates the ECG recording when their symptoms appear.

When is the patient given a pacemaker?

The pacemaker is implanted when slow heartbeat causes symptoms, the patient has had a life-threatening arrhythmia, or a heart failure symptom is symptomatic despite proper drug therapy. The pacemaker system consists of a small, subcutaneous pacemaker (generator) and 1-3 pacing electrodes. The electrodes are implanted through a vein in the right atrium and right ventricle and into the coronary sinus vein to pace the left ventricle.
An ordinary pacemaker senses the heart’s own rhythm and synchronises only if the heart rate slows below the programmed limit. The operating principle of the rhythm and malfunction actuator differs from a normal pacemaker.

When is the patient given an implantable cardioverter defibrillator?

Implantable cardioverter defibrillator (ICD) is implanted in patients who are at risk of having life-threatening arrhythmia. The ICD detects a disturbance and corrects it by pacing at a fast rate to try and correct the heart rhythm, or cardioversion – one or more small electric shocks to try and restore the heart to a normal rhythm, saving the patient’s life. After cardioversion, the device must be checked by a cardiologist experienced in the function of the device to make sure it has functioned properly.

When is the patient given a cardiac resynchronisation therapy pacemaker?

Cardiac resynchronisation therapy pacemaker (CRT) is implanted in patients whose cardiac pumping capacity is permanently reduced, their electrocardiogram shows gaps, and/or they suffer from shortness of breath after even a slight stress, for example a peaceful walk. The CRT device aims at improving the pumping capacity of the heart by simultaneously synchronising both the right and the left ventricle. Adjusting the CRT is always done individually and often with the aid of an ultrasound examination of the heart.

The expertise and experience of the cardiologist programming the CRT are key not only in optimising the pacing controls but also in assessing the patient’s heart disease.

Related to the subject